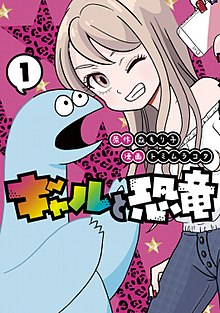 The seventh edition of Kodansha’s Weekly Young Magazine, published on Monday, announced that the manga My Roommate Is a Dino, created by Moriko Mori and Cota Tomimura, will end with the publication of the magazine’s next issue, which will be published on January 24.

The manga was first published in Kodansha’s Weekly Young Magazine in October 2018 by Mori and Tomimura, who are a married couple. The manga’s sixth compiled book volume, published by Kodansha in September 2021.

On Tuesday, Kodansha Comics released the sixth volume of the series in English.

According to Anime News Network, the manga was the inspiration for a parallel television anime/live-action series, which aired in April 2020. After the COVID-19 pandemic made part of the series’ production process difficult, the series was forced to postpone the release of new episodes, which began in May of that year.

The manga returned in November of that year. As the anime/live-action series, Gal & Dino was airing, Funimation streamed the manga series.

The report released in February 2020 revealed that aside from Miyuri Shimabukuro, the anime’s cast includes Yoko Natsuyoshi, who portrays Kaede’s buddy Yamada, Youki Kudou, who plays the role of Kaede’s senior colleague at her part-time work, and Seiichiro Yamashita, who plays Kaede’s boyfriend Shōta.

Jun Aoki of Pop Team Epic directs and supervises the scripts. Tru Kanegae directed the sound, Yasumasa Koyama did the effects, Glovision did the music, and Gin of Busted Rose composed the song.

My Roomie Is a Dino

According to Kodansha US, the manga series begins with Kaede, who is drunk and unsure of how she got back to her house. However, in her situation, not only was she unsure of how she had gotten home, but she was also unsure of how the dinosaur had gotten there. The two quickly become fast friends, but despite the fact that their personalities complement one other, they will need to learn how to communicate effectively in order to live peacefully together.