Amidst the pounding of missiles into Ukraine, President Putin was speaking at a concert to mark the 8th anniversary of the referendum on Crimea’s so-called reunification with Russia in which 200,000 Muscovites gathered in a soccer stadium.

Putin had a chance to try and rally support for his war on Ukraine. But all did not go as planned for him as his speech was cutoff midway.   Putin’s speech audio was suddenly replaced by music and cheering as the audience watched in dismay. 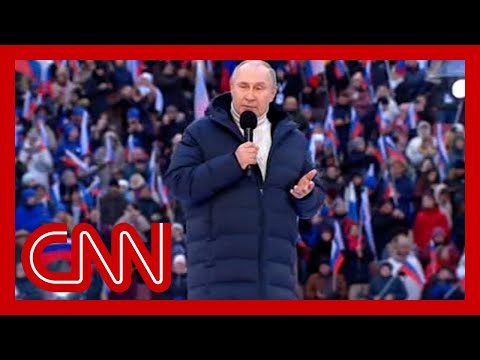 CNN’s Bianna Golodryga tweeted video of the sound cutting out during the speech. She wrote, ““Can’t think of a more effective way to showcase what things in a post-Western technology Russia will look like,” wrote Golodryga.”

In his brief speech, Putin said Russia “will definitely implement all our plans” in Ukraine.
“To spare people from this suffering, from this genocide — this is the main reason, motive and purpose of the military operation that we launched in the Donbas [an eastern Ukrainian region] and Ukraine,” he added.
Exit mobile version