Believing is the strangest thing in the world.

It’s time to flip things on their heads. “Stranger Things” is back on Netflix. Volume One of Season 4 of the hit television series will premiere on May 27, 2022. Volume Two will premiere on July 1st, five weeks later.

“It’s been six months since the Battle of Starcourt, which brought terror and destruction to Hawkins,” reads the official synopsis for “Stranger Things’ season four.

We’re looking at the list of original characters through the lens of astrology before things get weird, in honor of what is forming to be the best season ever. Put on some snyth music and keep reading to find out which Demogorgon-fighting character you’d be depending on your astrological sign. 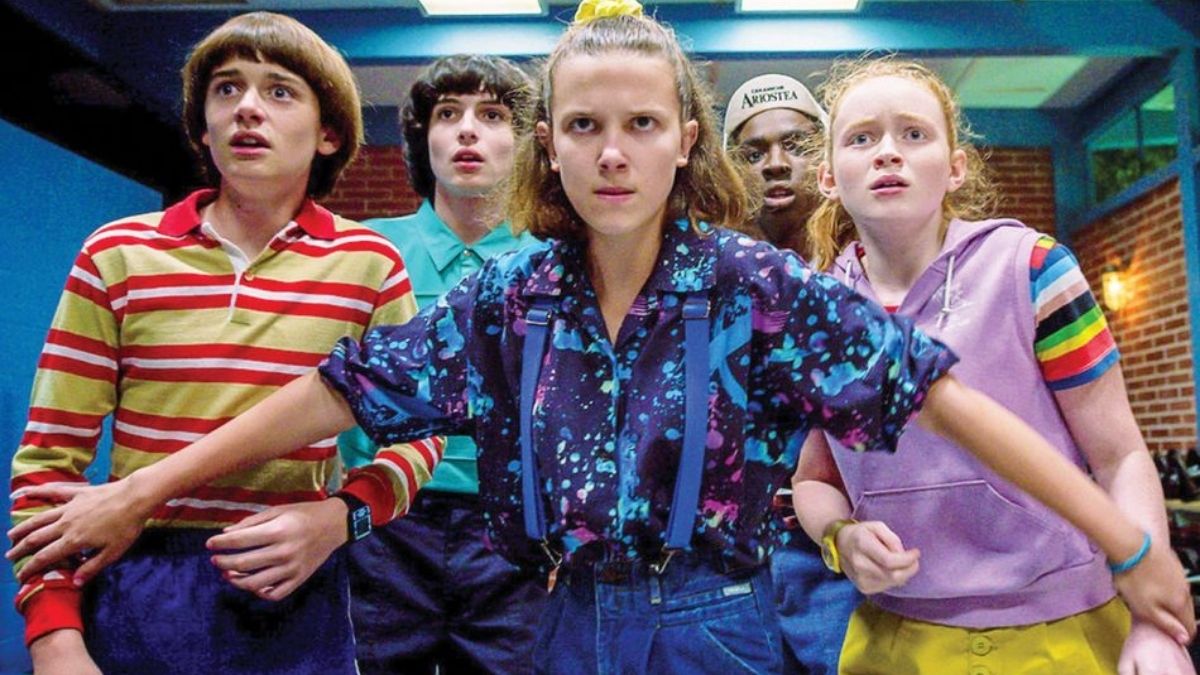 Mike Wheeler, who looks like Tommy Lee and doesn’t hesitate to plunge headlong and face first into danger, is an example of the first sign of the zodiac, Aries, who wants to blaze a trail rather than follow a road. Mike is a natural leader who is fearless to the point of recklessness, but he helps others feel comfortable and seen, particularly Eleven.

Aries is a fire sign that prefers action to thinking and will not back down from a confrontation, even if they are outnumbered and/or outgunned. Aries energy is valiant to the end, with hero heroics. They take oaths seriously and pray at the altar of friendship. Promises must be kept, as Mike stresses to Eleven, and “a friend is someone you’d do anything for.”

A Taurus will only act when they are completely prepared. It follows that a Taurus like Hopper, creatures of habit who elevate routine to ritual, would demand solitude and seclusion under the banner of “mornings are for coffee and thought.” It’s not only indulgent, but it’s also on brand for a bull to have beer and donuts for breakfast. Taurus is symbolized by the Hierophant in the Major Arcana of the Tarot, a priest who transforms the otherworldly into the physical, a tendency shared by Hooper, who is likewise willing to suspend belief in his quest for the truth. Taurus is stubborn and inflexible, and their stoicism and inflexibility can alienate others, as evidenced by Hopper’s policing (pun intended) of Eleven.

Geminis are born to examine and question, which is both a blessing and a burden. Lucas’ initial distrust of Eleven and his encyclopaedic knowledge of the “Satan’s Baby” fireworks are explained by his observe/investigate/commentate attitude to life. Lucas’s preferred weapon is a slingshot, and his smart mind is a weapon in and of itself, as Gemini is an intellectual air sign.

Lucas’s on-again, off-again connection with Max is likewise symptomatic of Gemini’s noncommittal energy. His spill of the paranormal beans to Max before informing the other people in The Party is also in line with Gemini’s proclivity for oversharing.

Cancer is influenced by the moon and is linked with motherly instincts, a sense of belonging, strong intuition, and unpredictable moods. In her fight to preserve her kid, Joyce Byers bravely walks the edge between sainthood and madness. Cancer is a water sign that views the world through the eyes of emotion rather than logic. It is thanks to this strategy that Joyce is able to speak with Will while he is trapped in the Upside Down. Joyce, guided by motherly instincts and free of rational thought, immediately recognized Will’s body as a forgery. Joyce is an apex Cancer and a hero in the “Stranger Things” universe because she trusts her feelings rather than what she sees.

All lion, with enormous hair and a large heart. Karen Wheeler, an Alpha mother, demonstrates the maximum and minimum expressions of Leo energy. She was dragged into a soul-sucking wedding by the promise of finery and a pleasant existence, riches being catnip to a Leo. Karen would be drawn to sensual literature and a fellow big cat like Billy Hargrove, driven by flattery and driven by desire.

Karen is saddened by her two eldest children’s deceptions, not by the notion that they don’t trust her with their problems. Leos have the lovely trait of befriending a wide spectrum of people, seeing as they do, the star power in everybody, and are warm and inviting to strays and strangers. Karen’s casserole dedicated friendship with Joyce is explained by this acceptance and affection.

Nancy fits the stereotype of Virgo as the zodiac’s perfectionist by being dedicated to studies and skilled at target practice. Nancy, a Virgo, is a natural investigator. She is cautious but not fearful. Nancy, who is misunderstood by her peers, demonstrates that she is capable of outwitting or sometimes destroying her foes, as well as exposing corruption.

Nancy’s choice of romantic partners and job goals can be explained through the prism of Virgos’ fascinating capacity to see the opportunity in all things and all people. She looks at things not as they are, but as they could be, and her capability to fake and feign normality begins to weaken as her character grows. “All this time, I’ve been trying so hard to act like everything is good, but it isn’t,” she reveals.

Steve exemplifies some of the less spectacular aspects of this cardinal air sign. He’s a f**k boi with amazing hair who loves to be liked and is prone to pack mentality. Steve’s personal metamorphosis takes shape as the seasons pass, and his finer Libra attributes begin to shine. Because the sun is in Libra, it is having difficulty asserting itself or finding a purpose. Libras must be triggered in this regard.

This need is exemplified by Steve, who is enriched by and through his interactions with others. He’s able to beautifully display the Libra talent of mediation by becoming a nanny and surrogate elder brother to the other characters. Venus, the planet of aesthetics and attachment, rules Libra.

Pluto, the planet of death and rebirth, and Mars, the planet of action and aggression, are the two planetary lords of Scorpio. Eleven embodies the heightened traits of both planets as a telekinetic prodigy who can destroy objects with her mind. Scorpios were created to evolve through adversity and to teach others that what could be faced can also be conquered. Eleven is the very definition of an actualized, in their power Scorpio, having progressed from a prisoner of a system to a dismantler of it. Eleven exemplifies the sign’s fierce loyalty through her willingness to put everything on the line, including her own life, to protect those she cares about.

Sagittarians are renowned for their unwavering optimism, lofty aspirations, and weird sense of humor, all of which can be found in Dustin, a fan favorite on Just Can’t Keep Him Down. Dustin’s good disposition and famous one-liners keep his buddies in great spirits, as he greets hardship and critics equally with his gapped tooth smile.

Saturn, the planet of laws, constraints, hard lessons, and paternalistic punishment, rules Capricorn. Saturn is a parent figure in astrology, reflecting how we are regarded and molded by the world at large. Dr. Martin Brenner, better known as Papa to Eleven and the bearer of major daddy vibes, enters the picture. Capricorns are all about business, and their aesthetic choices serve to reinforce their profession.

Brenner loves fitted suits with a sense of power and importance, as well as cap toe shoes similar to those worn by JFK. Capricorns at their best are considered the most effective, going to tremendous lengths to gain power and push past their limits. Capricorns are relentless in their attainment of goals at their lowest. Brenner’s ability to “parent” Eleven is a manifestation of his lower Capricorn characteristics, rewarding her with shreds of love but terrifying her when she fails to provide.

Will Byers, an Aquarian, gets himself wrapped up in the Upside Down. Aquarians are recognised for being a little bit out there, but nobody has went far beyond Will Byers. Electricity and abrupt changes are connected with Aquarius. When Will is stranded in the parallel dimension’s hellscape, he uses the wiring of lights and electronics to connect with his mother Joyce.

For Aquarians, there’s a mismatch between who they are and who they appear to be, a topic exemplified by the Mind Flayer’s possession of Will. Will’s objection to being monitored and pampered by his family members and friends following his rescue can be explained by the fact that Aquarians are independent thinkers who appreciate freedom.

Jonathan offers serious Pisces vibes, brooding with a penchant for music and a scowl/hair combination that evokes the late great Kurt Cobain. Jonathan is sensitive, perceptive, and emotionally caring, and is moved to tears by dead rabbits. He is dedicated to his mother and brother, demonstrating to the latter that being different is not only acceptable, but desirable. The twelfth sector of the unconscious mind is ruled by Pisces, and residents feel compelled to flee from reality into their own sound tracked universe.

Pisces, ruled by Neptune, the planet of illusions and fantasies, has always been searching for hidden significance beyond the level, a theme Jonathan hits on when Nancy inquires about his interest in photography: “Sometimes people don’t really say what they’re really thinking… But you capture the right moment, and that says a great deal.” Instead of fighting his outsider position, Jonathan embraces it, dismissing normies like Steve and letting detractors’ insults bounce off his bent shoulders.

Posted on May 26, 2022 By Christopher Renstrom"Stranger Things" CharacterZodiac Sign
Go to mobile version