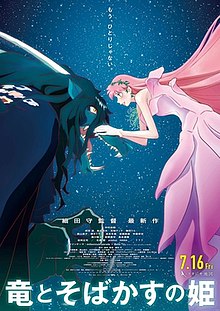 Belle, the ambitious and uplifting new anime film from writer-director Mamoru Hosoda, joins a lengthy run of adaptations by bringing the story into the digital age.

Magical curses have been replaced by carefully crafted internet personalities, and charming singing candlesticks have been transformed into mewling artificial intelligence.

Mirai and The Girl Who Leapt Through Time filmmaker takes the primary concept one step further by highlighting how the connection is a two-way street.

According to Arkansas Online, anyone who is a brilliant Japanese filmmaker who works in the realm of fantasy animation will inevitably be compared to the legendary Hayao Miyazaki. Yasujiro Ozu, on the other hand, may be a more appropriate connection for Hosoda.

As artistically and thematically stunning as Hosoda’s films are, they are founded in simple and meaningful human stories that are universally relatable.

His most recent movie, “Mirai,” was nominated for an Academy Award and is considered to be one of the best family films released in recent years.

The report unveiled that during the course of the story, a 4-year-old boy who is struggling with the arrival of a new baby sister and dealing with new feelings of jealousy is visited by his sister, who is now a middle-schooler. Other time-traveling encounters occur, and the boy gains a greater sense of understanding and empathy as a result.

Unlike his previous films, “Belle,” which premiered in theaters last week, Hosoda’s latest is more intricately drawn. Beauty and the Beast is reimagined in an ultra-modern setting, as a digital metaverse realm is known as “U” is used to convey the fairy tale.

Belle takes place in a near future in which a virtual-reality platform “U” has taken over the collective consciousness of the world.

In the story, Polygon revealed that Suzu is played by singer Kaho Nakamura, who portrays a shy rural adolescent who is still grieving the death of her mother, and drowned while trying to save a child from a raging river.

Suzu and her mother were both passionate about music, and ever since the horrific incident, Suzu has experienced panic attacks whenever she attempts to sing. When she enters U as an avatar named Belle, she only begins to rediscover her confidence and her voice. With the assistance of her hacker pal Hiro played by Lilas Ikuta, she unwittingly becomes a viral pop idol in the course of the film.